A Festival of Festivals 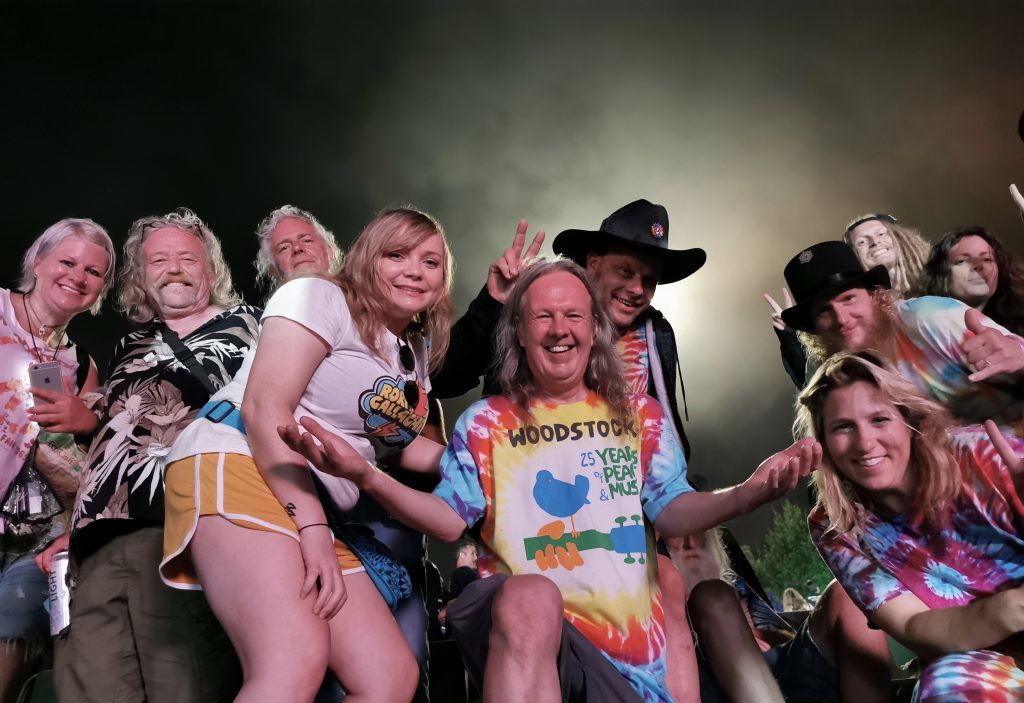 A Festival of Festivals – by Brian Hassett – Part 2

But back on the Woodstock Spirit side, Bethel Woods was letting people in for free for Fogerty for anybody outside the gates on the last night. And they did mount a substantive & entertaining special exhibit for the 50th with all this one-time-ever stuff leant for display, including the sign that someone painted in 1969 telling neighbors not to buy Max’s milk that his wife Miriam cites as being the tipping point in him deciding to host the festival.

Or I love how, when you walk into the first room of the permanent exhibition at the official Woodstock museum there’s a picture of none other than Neal Cassady laughing in the immensity of it. Mind you, they don’t mention his name, or the fact that he’s sitting in the Furthur bus (that actually came to Woodstock in ’69), or that Allen Ginsberg took the picture . . . but at least he’s there in Spirit laughing through eternity.

And then there’s the part where Albert Hoffman wanted to get a Prankster wristband to Michael Lang, and hadn’t been able to meet up with him at Yasgur’s farm, so he went to where they have a participatory paper-plate exhibit in the museum, and he writes “Gives this to Michael” then pins the wristband to it and uses his nine foot reach to drop it perfectly into a Michael display in the museum.

The Pranksters strike again. Or then there’s Yano and Ashlee stretching out their 50 foot tapestry for the 50th anniversary for the first time at the crown of the lawn of the Woodstock field . . .

like a rainbow framing the assembled — which happened for real the next night . . .

Or there was the part where Arlo gave us a class in the History of Songwriting & Storytelling, performing Woody’s This Land Is Your Land, and Bob’s Gates of Eden, and Steve’s (The Train They Call) The City of New Orleans, plus his own Comin’ Into Los Angeles, where he told us how the mic was all screwed up on that, his opening song, at Woodstock ’69, and how they had to use another live audio version in the movie, and that’s why there’s so many cutaways, cuz they couldn’t synch up his lips and sound.

Or there was Carlos pulling off an extended Exodus by Marley with the Doobie Brothers joining him forming about a 20-piece orchestra; or John Fogerty weaving in a Give Peace A Chance with his sons. And there was Melanie playing with her daughter Jeordie at the Yasgur’s farmhouse site; and Arlo singing his dad’s songs at the Yasgur’s farm concert site. And there was Santana’s wife Cindy singing a rocking Imagine from her drum kit; and Fogerty’s son Shane solo & electric on the big stage delivering a respectably updated Star-Spangled Banner.

Or there was that wild moment when the rains hit during Santana and I climbed over the split-rail fence at the back and up some rocky outcropping under some trees, and nodded hello to a couple also crouched down in the dark taking shelter from the storm. Then through the splashing rain and concert din, I think I hear him say, “Are you an author?” but I sort of ignore it, assuming there’s no way the guy just asked me that. Then out of the darkness I hear louder, “Hey, do you write books about Jack Kerouac and stuff?” “What?!” thinks I, squinting over in the Huckleberry Finn riverbank-perched darkness. “Yeah,” I kinda mumble, not sure what’s lurking next to me in the midnight rain. “I came to your reading at the Golden Notebook last year.” (!) And sure enough it was a book-buying fan in the dark on the rocks in the middle of the rain in the middle of a concert at Woodstock!

Or there was the moment one of the guys from the Doobie Brothers mentioned from the stage that he’d just met Wavy Gravy backstage, setting off a flurry of activity in Pranksterland until it was concluded the guy must have been speaking metaphorically.

Or there was Tedeschi-Trucks’ 12-piece band stealing the whole damn musical show for the weekend, including pulling a Dead maneuver by opening with Santana’s Soul Sacrifice then weaving back into its ending later in the show. Or them climaxing the whole thing with Sly & The Family Stone’s I Want To Take You Higher that riffed and built . . . and built and riffed to a frantic sweating acid dancing peak. I’ll probably get in trouble for this, but this Deadhead made a note during the show that these guys were doing what the Dead and the Allmans strived for with the 2 drummers and improvisational soloing — but were doing it better. Yeah, I said it. The arrangements, the playing, the interacting, the drummers driving each other and in turn the band, the horn section, the harmony singers . . . those latter two additions being something those former two groups really coulda used — proving this more-than-capable modern ensemble was fulfilling the promise of their forefathers and truly taking it Furthur.

versus the following night John Fogerty delivering a long & painfully tone-deaf rant about how bad the Dead were at Woodstock and mistakenly blaming them for the logistical/technical problems of that Saturday night in the rain 50 years ago. I walked out of there thinking less of John Fogerty than when I walked in — his self-serving sermon doing more damage to his reputation than his two hours of playing benefited it.

Or there was the part where they were going to show the revised director’s cut of the original Woodstockmasterpiece of an Academy Award-winning documentary on the original field — in fact they billed the night as the “Film On The Field” but moved it in to the concert amphitheater at the last minute — an unfortunate setting, except for the benefit of it playing through the concert PA — so you’re hearing every note of every performance on a crystal clear full range 2019 sound system cranked to 11. Or there’s the part where Michael Lang’s first appearance elicited spontaneous applause from the crowd, and by his second appearance a full-throttled whooping. And then on the Monday following, when somebody mentioned Artie Kornfeld, I realized it was the first time I’d heard his name all weekend.

Or there was that time where I was sitting next to Arrowhead’s Rose during the screening and we both got choked up together at the overwhelming beauty of the movie and the audience-art interaction as though all the performances were happening in person right in front of us — and all experienced from our Dead-center free-show cushy-seats in an amphitheater full of the best kind of family.

Or there was the comical karma when the self-anointed Woodstock purists who wanked themselves off shitting on Michael Lang all year had to deal with their original farm host Jeryl warmly inviting him back to the garden and embracing the person without whom none of this weekend would be celebrated.

Or there was the part where a big rain storm blew in right on Woodstock cue, but in 2019 they have radar weather satellites and saw it coming, and at Bethel Woods they evacuated the entire lawn telling people to return to their cars to ride it out, but a bunch of us just stormed the domed pavilion that had been the media center, and the privileged so-called reporters couldn’t handle the great unwashed having the gaul to invade their pampered bubble — and watching them trying to defend their sanitized world with actual people going to an actual concert was worth the price of invasion.

What there wasn’t was a unified collective hundred-thousand-person epiphany that can only be conjured in large crowds collectively peaking.

The idea and mindset of “Woodstock” is part of global language and culture. If the logistics and finances and laws and security and payola and permits and propaganda and paranoia and polarization and lots of other poop words made it impossible to do an actual festival in these bad trip times — The Woodstock Spirit was proven very much alive this past weekend.

And the thousands of people who came from all over the world and manifested the vibe in such myriad ways proves this part of our collective consciousness is here to stay — coming to life in a collage of reunions collectively created across the canvas of the land. In our ad hoc krewe we had Danes and Irish and Canadians and Germans and Yanks from every region and persuasion all sharing the peace pipe around the bonfire — The United Pranksters of All Nations — brought together over an idea that “a half a million kids could get together for three days of fun and music, and have nothing but fun and music,” as Max Yasgur put it the first time ’round.

There’s a festival culture in a wear-what-you-want and love-who-you-want world that showed itself early and vibrantly in 1969 on an open field in an open time — and a lot of the best of that idea is still going on in the world we live in today.

God bless those who did it the first time . . . and those who are still doing in our time.

A Festival of Festivals 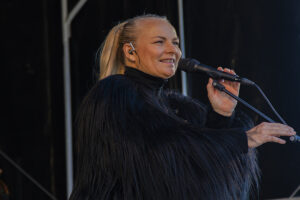 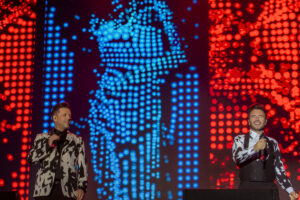 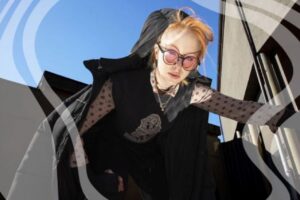 STØT OS via ”FÆLLESKABET SIDE 33”